Are you looking to purchase firewood but struggling to understand the pros and cons of different wood species? Mulberry is relatively cheap firewood with excellent heating qualities. Here’s a full breakdown of the pros and cons of mulberry firewood. See how it compares to oak, beech, maple, and other top-tier burners. Learn about the qualities that make mulberry an excellent choice for wood-burning fireplaces, wood stoves, and campfires. 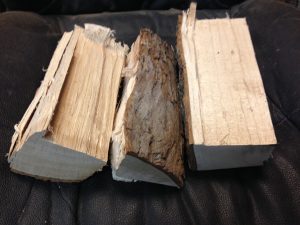 Before we get started, here’s mulberry firewood at a glance:

When you’re assessing firewood, there are not many aspects that are more important than a wood’s potential heat output.

According to Utah State University’s Forestry Extension, a 4,712-pound cord of green mulberry, or a 3,712-pound cord of dry mulberry, is capable of producing 25.8 million BTU of heat. BTU stands for British Thermal Unit. A BTU is the amount of heat that it takes to heat a pound of water by 1 degree. Mulberry’s BTU training puts it right up there with some of the biggest heat producers, including apple, oak, ash, beech, and maple.

Creosote is a tar-like buildup that is produced when plant-derived materials are burned. When creosote-producing woods are burned indoors, creosote film is allowed to develop on the inside of heat pipes and chimneys. These incredibly flammable and potentially harmful deposits put people and their homes at risk.

Mulberry’s high moisture content makes it a generous smoke producer. With that said, seasoned mulberry firewood is not exceptionally smoky. However, it typically takes 12 to 14 months to season green mulberry. That’s nearly twice as long as it takes to season comparable hardwoods, including oak and maple. Many first-time mulberry users fail to properly season their wood and end up dissatisfied with their wood choice.

Firewood that contains excess moisture is more likely to spark. Sparks are an undesirable firewood trait, as sparks have the potential to spur chimneys and house fires. Mulberry’s high moisture content makes it a big-time spark producer. For this reason, many people choose to burn theirs outdoors.

Mulberry produces extremely slow-burning coals. These slow-burning briquettes are capable of producing heat all through the night.

How Long Does It Take to Season Mulberry

It takes about 12 months to properly season mulberry. On the other hand, most firewood only needs to be seasoned for six months. Don’t attempt to cut your seasoning period short. That extra time ensures that the wood is fully dried by the time you go to burn it. Properly seasoned mulberry contains 50% less moisture than green mulberry.

Improperly seasoned firewood produces more smoke and creosote. It does not live up to its heating potential. Moreover, it is more difficult to handle. You may be able to reduce your seasoning time requirements by cutting your wood into small pieces or stacking it for optimal air circulation. With that said, most people find that mulberry is easier to split after it has been seasoned. After it loses most of its moisture, it becomes quite brittle.

You’ll notice mulberry turn brownish gray as it begins to lose its moisture.

Mulberry’s high sugar content gives it a pleasant scent. Many firewood experts compare its delicate aroma to that of hickory and apple. There’s no doubt that burned mulberry is a welcome household scent during cold winter days and nights. We’ve even seen mulberry essence added to candles and deodorizers. It’s even used for smoking meat and vegetables.

Keep in mind that firewood is sold by the cord. A standard cord of wood is 4 feet tall, 8 feet long, and 4 feet deep. With that said, all firewood varieties do not weigh the same. A cord of green mulberry weighs roughly 4,712 pounds. Meanwhile, a cord of dry mulberry weighs around 3,712 pounds. It’s a denser wood than pine, hemlock, cedar, and many other softwoods. Its density makes it one of the better deals on the market.

Keep in mind that mulberry is typically used for its berries. As such, it is not one of the most commercially available firewood species on the market. If you are fortunate enough to come across some usable mulberry limbs to trunks, don’t hesitate to take it. This wood may be hard to come by, but it’s just as valuable as more readily available hardwoods. The only downside is you’ll be waiting longer for the finished product.

How Mulberry Compares to Other Firewoods

Mulberry is top-tier firewood with plenty of heating potential. It is capable of producing as many BTUs as most types of oak. Its coals can burn for hours, offering warmth throughout the night. So long as it is properly seasoned, it does not produce much smoke or creosote. Pine and other sap- and resin-heavy firewoods are more likely to create problems.

As you may recall, a cord of seasoned mulberry firewood produces 25.8 million BTU. That’s more heat than a ton of anthracite coal. Mulberry firewood is also more efficient than ash, maple, and pine firewood. It’s just a notch below top performers, such as oak, beech, and apple.

There’s no doubt that mulberry wood makes excellent firewood. The next time you come across some mulberry wood, be sure to snatch it up. You might need to wait a little longer before you can utilize your burn pile. However, properly seasoned mulberry firewood ranks right up there with some of the nation’s top heat producers. As a matter of fact, it is most comparable to seasoned oak. Its pleasant aroma and high heat output make it a favorite among those in the know. Drop us a comment if you’re interested in learning more about mulberry wood!